Enjoy this amazing chile cascabel salsa created by Mely Martinez from Mexico in My Kitchen, our favorite Mexican food blog. Mely was born and raised in Tampico, Tamaulipas in Northern Mexico where she learned to cook traditional dishes from a young age.

Now she shares her favorite recipes on her blog and her Facebook page. Be sure to visit. You won’t be disappointed.

There are very few popular dishes or stews in Mexico that mention the Cascabel pepper as an ingredient. In fact, I have only seen it as a part of salsas cooked with tomato or tomatillo in Central Mexico, in those small street stands where a woman offers freshly made thick corn tortillas cooked on a small charcoal stove.

Those thick tortillas, made of either white or blue corn, are a really delicious treat when topped with this Cascabel salsa and fresh crumbled cheese. And that’s just the way I like to use the salsa in this recipe!

The Cascabel pepper has a dark brown-colored skin with a spherical shape, and is unique because of its particular taste and aroma. The peppers are not too spicy; I would say they are rather mild and sweet for my personal taste. The flavor, however, is incomparable. It has a rustic nutty taste after you roast it and soak it for some minutes, in order to soften them.

Cascabel means “rattle” in Spanish, and this spherical pepper rattles when you shake it because of its loose seeds inside (hence the name Cascabel). It’s Scoville rating is 1,300-2,000 SHU. Just to give you an idea, Ancho and Pasilla peppers are also around the same spiciness level. 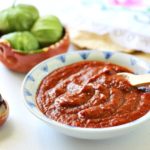