Homemade sopa de fideo (noodle soup) is one of my favorite dishes. This is Mexican lunchtime comfort food in the way that grilled cheese and tomato soup is in the U.S. Think warm fuzzies in a bowl. Every kid in Mexico grows up on it and everyone, young and old, still eats it regularly as part of the typical comida.

How to Make Sopa de Fideo

Make it from scratch. It’s worth the small bit of extra effort for the authentic flavor. Many cooks take shortcuts – I’ll admit it. I do too at times – by using tomato and chicken bouillon or canned tomatoes instead of real chicken broth and pureed tomatoes.

Using powdered bouillon makes an acceptable version, but, it doesn’t make your heart happy in the same way as the real deal does. Make it from scratch and you’ll see what I mean.

You’ll need an 8 oz. package of fideos, which are thin Mexican style noodles used to prepare this soup. You can substitute thin spaghetti, vermicelli noodles, or angel hair pasta broken into 1″ pieces if you are unable to find fideos.

You will also need

Cut the tomatoes in half and remove the seeds. Puree the tomatoes, onion, and garlic in your blender and set aside. This is what the pureed mixture will look like.

Preheat 3 tbsp. of vegetable oil to medium-hot. Add the noodles and stir to coat with oil. Continue stirring until the fideo pasta has turned golden brown and a few strands have turned deep brown. Browning the noodles adds depth of flavor to the soup.

Strain the pureed tomatoes, onion, and garlic into the browned noodles.

Pour in the chicken or vegetable broth and stir.

Bring the soup to a boil.

Cover and reduce to low heat. Cook for 10 minutes.

Your perfectly cooked sopa de fideo is now ready to serve. Be sure to adjust the salt to taste.

Serve your sopa with a couple of lime halves. A squirt of lime juice brings the flavors together. A spoonful of diced avocado or a pinch of queso fresco are nice touches to finish your fideo soup. 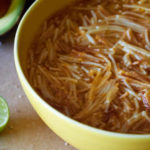