×
You are here: Home / Salads / Chayote and Zucchini Squash Salad

This Chayote and zucchini squash salad is a favorite of our photographer’s family. It regularly appears on their lunchtime table.

It is so simple to prepare with just a few ingredients. You may think it looks bland but don’t be fooled. Lime juice brings out the bright, full flavor of the vegetables.

You only need 3 ingredients to prepare the salad: chayote, zucchini squash (calabacitas or calabaza). When you are purchasing the chayote, choose the spineless variety for this dish.

Slice the chayotes in half lengthwise. Don’t peel them.

Put the chayote in a large pot and cover with 3 inches of cold water.

Cover the pot and bring to a boil. Reduce to a simmer and cook the chayotes for 5 minutes.

While the chayote is cooking, remove the ends of the zucchini squash and slice into spears.

Add the zucchini squash to the simmering chayote. Cover and cook for 5 more minutes until the vegetables are soft but not mushy. You want them to hold their shape when you serve them.

Remove the vegetables from the pan. When the chayotes are cool enough to handle, use a spoon to remove the hard pithy center. Discard the centers.

Chop the chayote into 1″ pieces.

Arrange the vegetables on a serving plate sprinkle with lime juice and salt. Serve warm or at room temperature. Don’t serve this salad chilled. It makes the flavors taste flat. 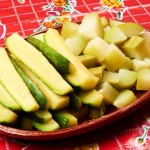 More Mexican Salads and Side Dishes