Believe it or not, cactus is not only edible, it is delicious.

Prickly pear cactus salad – ensalada de nopal – is eaten throughout Mexico. It is typically served as a side dish or eaten in tacos as a light meal. It’s great paired with carne asada.

It is also great wrapped in a warm corn tortilla drizzled with your favorite salsa.

Try our recipes for the guajillo chili salsa or the classic Mexican salsa.

Cactus has a nice, bright, vegetable taste with a hint of sharpness. I have heard the taste described as “sour green beans” which does it a disservice because cactus is quite tasty.

If you have never tried cactus, I think you will enjoy it.

When you are buying the cactus for this dish look for paddles that are bright green and plump.

If they have started to shrivel and have lost their bright green color they aren’t fresh.  Also, choose the smaller thinner paddles which are younger and more tender.

How to Cook the Cactus

Most of the cactus available at the grocery store has already had the spines removed but give it a quick check to ensure that no spines remain.

Raw cactus has a bright green color. To cook it you add it to cold water in the pan, not hot water.

Bring the cactus to a boil and then reduce to a simmer. As the cactus cooks it turns a darker green and releases slime similar to the slime released by okra.

You will have to skim the slime off a number of times during cooking. The slime is called “baba” which translates as “drool” in Spanish.

I know that that doesn’t sound that appetizing but just remember cactus really is tasty.

Cook just long enough that it has released most of the slime, about 10 minutes. Don’t overcook it. You want it to have a little crunch to it.

Fully cooked cactus. Rinse the cactus under running water to remove any remaining slime. Rinsing it also stops it from cooking anymore so it retains some crunch.

The Remaining Ingredients Prepped and Ready to Add to the Salad

Add all of the ingredients to a mixing bowl and gently turn until well mixed. The ranchero cheese is salty.

You may not need to add additional salt. Only add more after you have tasted it to avoid an overly salty salad.

Serve the salad at room temperature or slightly chilled. Don’t serve it very cold because it tastes bland when too cold. 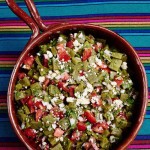 Cactus fruit is edible too.